The Benefits of Pilates

More than just a physical activity, Pilates is a way of achieving both physical well-being and its positive impact on the mind.
A daily quest for physical and mental balance, the search for harmony between muscles, mobility and stability, strength and endurance.

Helps prevent injuries and reduce the limitations of your body

From pain and tensions … Relax!

The inventor of Pilates

Joseph was born in Mönchengladbach, Germany on 9 December 1883. As a child he suffered from rickets, asthma and acute rheumatic fever, and consequently devoted his whole life to improving his physical resistance. As a youth, he practiced physical education, wrestling and gymnastics (which he later also taught). By the age of 14, he was muscular enough to pose for anatomical charts.

In 1912 Joseph moved to England, where he became a boxer and circus performer and taught self-defence. When the First World War broke out in 1914, he was treated as a “foreign enemy” and interned with other Germans in camps near Lancaster and on the Isle of Man. It was during this time that he developed the foundations of the Pilates method, using the mattress springs of the camp beds to add resistance and support to his exercises. He would later explain that his years of internment were invaluable as they gave him time to develop his method.

He became a nurse in the camps, which allowed him to work on the rehabilitation of the sick and wounded. He also taught the other prisoners the physical exercises he had developed. He would later proudly claim that thanks to his daily physical training, none of the internees under his supervision succumbed to the 1918 flu epidemic that killed thousands across England. 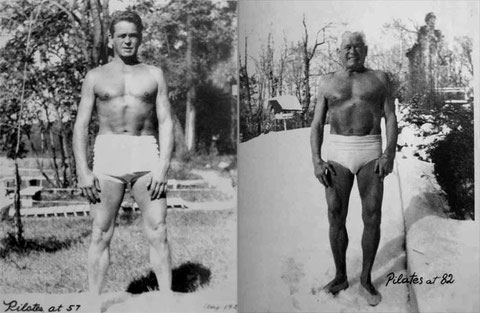 After the war, he returned to Germany and continued his training program in Hamburg, refining his methods with members of the city police force.

In 1926, worried about political developments in Germany, he emigrated to the United States. It was on the ship carrying him to New York, the Westphalia, that he met his future wife Clara. The couple opened a studio in New York where for four decades they would teach the method they then called Contrology.

The philosophy of Joseph Pilates

Every human being is born with a universal right, the right to remain in good health. With this fundamental idea, Joseph developed a complete repertoire of more than 500 specific movements to maintain, strengthen, and fluidify the body.

His method was built on the following principles:

Leave us a message !